I encountered an absolutely stunning piece the other day about how there really was no opioid epidemic.  The author's various arguments all centered on the basic idea that law enforcement and other special interest groups spread the lie about opioid use being epidemic so that they could increase law enforcement measures and make it more difficult for chronic pain patients to get access to opioids.  There are a lot of these conspiracy theories going around. There are active posters on Twitter who continue to beat the drum that this is a heroin or fentanyl problem and not a problem with prescription opioids. The same group will suggest that the problem is now benzodiazepine prescriptions - maybe even gabapentinoids! They make the false claim that "anti-opioid zealots" want to stop opioids for chronic non-cancer pain, even if it means that some of those pain patients will commit suicide. They continue to post debunked information about how a trivial number of pain patients become addicted to opioids if they are properly prescribed.

Time for a lesson about the opioid epidemic and how it evolved from the land of 10,000 lakes - my home state of Minnesota.  The graphics I am posting here are all from the Minnesota Department of Health and the Minnesota Department of Human Services.  In some cases the opioid involved overdose mortality is broken down into specific categories and in other cases it is just an aggregate number.  The first graphics I am going to post is on the epidemiology of admissions for substance use treatment from two time intervals for comparison. 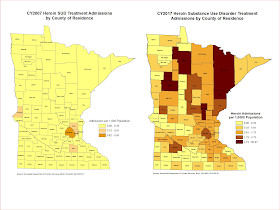 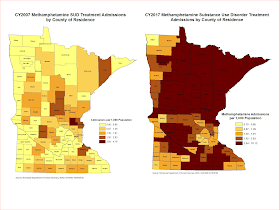 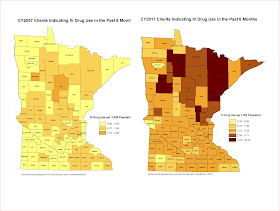 These maps are county by county density plots of the rate of admissions from a particular county comparing 2007 to 2017.  There are certainly limitations using administrative data but on the other hand it is the only data available and I would not be surprised if there was not some reporting obligation by licensed treatment programs to the state.  The most significant limitation on admissions data is that services in the US are rationed and there are never enough openings or finances to treat the people who need it.  Treatment programs also open and close. There is the question about whether all admissions are captured.

Given those limitations it is clear that the rate of admissions form Minnesota counties of residents being being treated for heroin use, methamphetamine use and intravenous drug use (IVDU) have all increased significantly from 2007 to 2017. In fact, the total number of IVDU admitted in 2017 was about the same for both heroin (N=5148) and methamphetamine (4843) users.  By comparison, in 2007 the number for IVDU were about 20% of the current numbers with heroin admissions at 1008 and methamphetamine admissions at 798.  In a separate report speedballing or the injection of methamphetamine and heroin is discussed but there are no numbers given on people who are using both.

The first lesson from admissions data is that the total number of residents using this compounds per county and the rate of use per county are both increasing. The geography of the spread is also of interest.  Minnesota has 54 counties and only 7 are considered metropolitan or urban counties.  The rest are considered rural.  Large blocks of these rural counties have increasing numbers of residents being treated for heroin, methamphetamine, and IVDU.  To me that is an epidemic.

Additional data looking at the epidemic in Minnesota comes from reference 2.  It is interesting because it is a direct comparison of deaths occurring in rural versus metro or urban counties.  It also looks at the types of drugs involved in the overdoses. 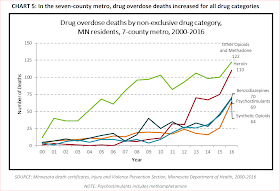 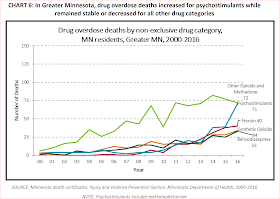 As can be seen in the above graphs, opioid and heroin overdoses both increased over the 16 years of the study period. In the Metro sample, the baseline rate of opioid overdose deaths was 43 Metro and 11 Greater Minnesota in 2000 and by 2016 this had increase to 256 and 138 respectively.  In the case of heroin overdose deaths the baseline rate was 1 Metro and 1 Greater Minnesota in 2000 and by 2016 the increases were to 110 and 40 respectively.  The rate of increase in opioid and heroin deaths in Greater Minnesota may have been impacted by the greater rate of increase in stimulant use and associated deaths.  This may imply greater availability of stimulants across a wider population area than opioids - but overdose deaths is an obvious problems for all of the compounds listed on these graphs.  According to my arithmetic that is a 9 fold increase in the death rate due to opioid and heroin overdoses over 16 years.

The final consideration is how is it that so many people started using heroin and fentanyl?  Many of the epidemic deniers seem to be suggesting that it just happened that way.  It was totally unrelated to opioid prescriptions.  If a clinician like me tells them that I have talked to hundreds of opioid users and I have heard initial use of heroin from exactly one person - they suggest that I don't know what I am talking about.  That is where this compelling graphic about opioid prescriptions comes in showing about an 8-fold increase in opioid prescriptions in the USA over about the last two decades. It would place opioid overdose deaths as about the 13th leading causes of death in the state.  Once an addiction starts, the economics of drug use is that most people can get heroin for considerably less than they can buy prescription opioids on the street.  That and the general characteristics of addiction lead to higher risk use of intravenous heroin and a greater potential for overdose.

Even though every data set has it's limitations, the alternate hypotheses by the epidemic deniers need to be considered as alternate explanations.  Conspiracy theories about people scheming to prevent the treatment of chronic pain and the "war on drugs" don't make any sense. If either explanation were true it would have to explain the explosion in opioid prescriptions in the 21st century and everything that unfolded since.

The only reasonable public policy must stop these overdoses and explode the associated myth that excessive opioid prescribing is necessary for the treatment of chronic non-cancer pain.