The Problem of Antidepressant Discontinuation 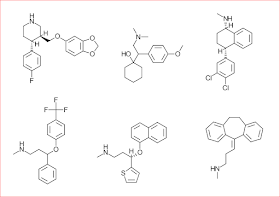 Antidepressant discontinuation is a useful topic to discuss for a number of reasons.  First, it is a legitimate problem for a number of people who want to stop the medication and find that they can't for one reason or another.  Secondly, some of the people are unable to stop because they have discontinuation or withdrawal symptoms from the antidepressants and for some people these symptoms are extremely distressing.  In other cases the people trying to stop get recurrent symptoms of anxiety, insomnia, and depression and have to resume the medication.  Thirdly, the solutions to the problem are poorly defined.  In the US, antidepressants are prescription medications and that should mean that they are prescribed for a clear indication and carefully monitored.  Those safeguards are not clearly present any more and even if they are having the indication and carefully monitoring the medication does not guarantee that the patient will not get severe side effects or problems with discontinuation.  On a population wide basis, prescribing antidepressants for only clear cut indications will mean that the minimum number of people are affected and that an antidepressant will be stopped at the earliest sign of problems.  All of the current trends in screening for depression, encouraging treatment by nonspecialists, and limiting the availability of non-pharmacological methods for treating psychiatric and emotional problems suggests that a major cultural change would be required to reverse those trends.    Fourth, because of these problems - the antidepressant issue is an informed consent issue to patients.  In addition to warnings about the usual side effects they also need to hear about the more serious side effects including serotonin syndrome, cardiovascular side effects, possible drug interactions and withdrawal and discontinuation symptoms.  Finally, it is not clear that liberal antidepressant creates more problems than it solves.  The best example I can think of to illustrate this fact is a paper I posted here in the past showing that there was a clear trend in decreased suicide in the elderly with increased antidepressant prescribing across the entire population of Denmark.  On  clinical basis I have had conversations with hundreds of people about stopping antidepressants and the results of many of those conversations is surprising.  Although the main FDA psychiatric indications for antidepressant prescribing are mood disorders, anxiety disorders, and obsessive compulsive disorder - it is common to find people who are taking them for other reasons. Extreme irritability and anger control is one.  Needing to have a "level mood" is another.  Taking antidepressants for menstrual and menopausal mood symptoms that do not meet diagnostic criteria for major mood and anxiety disorders is another.

The two main considerations for antidepressant discontinuation are whether the person experiences recurrent symptoms of the primary problem or specific discontinuation or withdrawal symptoms or a combination of both.

A few addition points about antidepressant withdrawal.  The first case in the medical literature was reported for tricyclic antidepressants in 1959 (1) and the first review in 1993 (2).  The symptoms were also described in the first edition of a major psychopharmacology text (2):

"There is no withdrawal problems with the TCAs of the type seen with narcotics, alcohol, or sedatives.  Instead, abrupt discontinuation of 150-300 mg/day or more of a tricyclic, especially after 3 or more months of treatment can induce autonomic rebound (ie, gastrointestinal disturbances, autonomic symptoms, anxiety, agitation, and disrupted sleep)."  p 276.

Gradual taper rather than abrupt discontinuation was recommended.  The issue of rebound from REM suppression and nightmares or intensification of dreaming was also discussed.

For the sake of brevity, I am going to discuss a recent trial of antidepressant discontinuation (4), what is wrong with that trial, and how to improve the state of affairs in the future.  For some reason, I could not find this study indexed by the National Library of Medicine.  Full text is accessible by the DOI number.

This is a study of an attempt to withdraw patients from antidepressants with success in doing that designed as the primary end point - further defined as no antidepressant use in 6 months and no depression or anxiety by a standard rating at 1 year follow up.  The patients were selected from 45 primary care practices across the Netherlands between February 2010 and March 2013.  The algorithm for patients selection in each stage with the resulting numbers are available in diagram form in the body of the paper.  Anyone not meeting criteria for maintenance anti-depressant or anxiolytic treatment were identified as possible candidates for the study.  Appropriate use of antidepressants for depression and anxiety was defined as a history of recurrent depression [≥3 episodes] and/or a recurrent psychiatric disorder with at least two relapses after antidepressant discontinuation.

6442 long-term antidepressant users were identified in these primary care settings.  2411 (37%) were eligible with that determination made by their primary care MD. 358/2411 (15%) consented to participate and 146 were included in this study.

The specific intervention is hard to get at in the description given.  For the intervention group a patient specific letter was sent to the general practitioner with the recommendation to taper the antidepressant. Antidepressant tapering instructions, antidepressant discontinuation symptoms, and the recommendation for slow tapering were all included.  The GP discussed this with the patient and then sent a response to the research team on whether or not the patient would comply with the recommendation.  Reasons for not complying were requested.  For the control group, patients continued their usual care and their GPs were unaware of their participation in the study.  In US studies this would be the treatment as usual group.

34/70 rejected the intervention citing fear of relapse or recurrence as the primary reason.  That is interesting giving the inclusion criteria.  Is it possible that disorder severity or anxiety or depressive subtypes were perceived as more severe by the patient than the recorded primary care diagnosis? None of those patients cited antidepressant discontinuation symptoms as a reason.

In their discussion the authors comment on a higher relapse rate in the intervention group that was not associated with antidepressant discontinuation.  They attribute it to anxiety about wanting to comply with the recommendation but not being motivated to do it.  I think that any anxiety about the recommendation is more likely due to the fact that the recommendation is coming from a source that is not their primary care physician.  Most people in primary care with longstanding relationships with their physicians are there for a reason.  Taking a recommendation in opposition to their GP would be highly problematic for many.  They cite several other reasons among them a poorly done meta-analysis of antidepressant trials suggesting a large placebo effect.  In fact, all of these meta-analyses are significantly flawed based on the included studies.  But more on how to sort that out below.

I am going to avoid constructing my own antidepressant discontinuation checklist but plan on that in the next several days.  My extensive clinical experience and the literature lead me to the following conclusions:

1.  Expose only the subpopulation who needs antidepressants to them:

This is easier said than done because of the literature on under diagnosis of depression in primary care settings, the literature (and lack of evidence supported guidelines) on screening everyone for depression, the new collaborative care initiative encouraging the use of a checklist to diagnose and treat depression, and the massive bureaucratic interventions to encourage screening and treatment with medication.  Like opioids - primary care physicians were scapegoated for not recognizing and treating depression.  Now both of the primary care professional organizations have their own depression treatment guidelines and these physicians are criticized for overprescribing antidepressants.  Things might go a lot better if the politics was wrung out of medicine.

2.  Recognize that some patients have severe discontinuation effects:

There is 60 years of literature on this topic, we have all seen it, and it should be a given.  It should be addressed even if there is not perfect research on how to help these people.  I have said it in the past and will say again - I have treated people with severe discontinuation symptoms and helped them stop the medication.  Some syndromes are much more complicated than others - like SSRI withdrawal that has an anticholinergic component.  As I have said in the past - I just don't prescribe some of these medications (paroxetine) and have not in decades.  I would never have prescribed venlafaxine again if they had not invented an extended release version and found it was very useful for people who can't tolerate any SSRIs - but that does not mean that there aren't people out there who don't get severe discontinuation symptoms because of venlafaxine XR.  All of this is an informed consent issue and you can't have that discussion seeing people very 10 minutes and handing them a prescription.

I will say that the majority of people that all psychiatrists treat routinely go on and off antidepressants without problems.  It is so commonplace that many health care companies have systems that send the physician a letter if the patient has not picked up their antidepressant prescription.  That is very common and typically because patients have reservations about starting the medication or how the appointment went.

3.  Study the problem in a realistic setting:

The study I discussed above was destined to fail. A more realistic study should reflect the clinical reality that every psychiatrist knows.  Instead of an intervention telling people when to stop, the intervention could look at all episodes of antidepressant discontinuation in a health care system.  Various strategies could be used and data on the reason for stopping and any discontinuation symptoms could be gathered in a systematic way.  There are several statistical models that can be applied to multiple episodes across fewer patients.

I would suggest that the intervention not be conducted by the physician who prescribed the original treatment because of the aforementioned conflict of interest.

4.  Despite the evidence-based crowd, the experts need to be heard:

Like many other psychiatrists, I have seen severe antidepressant discontinuation symptoms, but have been able to get the patient off of the antidepressant.  The idea that there are people who cannot get off these medications and they need evidence to get off the medications is a circular argument.  The evidence is out there, and the experts should write a consensus statement.  That should be the basis for further trials and those trials should employ psychiatrists who know how to do this.  If there are that many people with the problem - it should be easy for any University department to recruit them and study them in detail in the hope that they can successfully get off the medication.

5.  The issue is important in everyday clinical practice:

That concludes my brief discussion of the problem and what I think can be done about it.  One thing is for sure - political discussions of this issue fail to advance getting the best care to the maximum number of people - whether that is a bitter discussion of how antidepressants are poison and nobody should take them to how they should be casually prescribed as part of a screening process.

I thought I would add a polling question to this post for any physicians out there treating depression.  One of the commonest encounters that I have had due to this blog have been people who claim:

I don't doubt #1 at all because I have seen it and treated it.  In the case of #2, the only medication I have seen this occur with was beta blockers - metoprolol  specifically.  In that case the patient was taking the medication for blood pressure control and developed severe panic attacks and associated tachycardia and insomnia trying to taper and discontinue the medication.  There was no previous history of anxiety.

I am interested in what physicians have directly observed in these areas.