The Myth of Monolithic Psychiatry 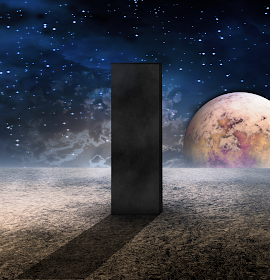 One of the familiar strategies of the various antipsychiatry factions out there is the monolithic psychiatry tactic.  A monolith can be a monument that is often a large rectangular block of stone.  The most recognizable monolith in my time was the recurring black monolith in 2001 - A Space Odyssey.  A monolith can also refer to "a large and impersonal political, corporate, or social structure regarded as intractably indivisible and uniform."  In that sense, a monolith can just be a fact.  I could refer to just about every government agency and insurance company that I have to deal with as monolithic.  They couldn't care less about anything that I say to them or how infuriating it is that I have to deal with them.  Their only interest is in their corporation and doing the absolute minimum that might cost them something and they are very good at it.  In practical terms that means authorizing any treatment I am forced to ask them about.  But in a new twist many of these organizations also aggressively trying to make any physicians they are working with - look bad.  They must think there is some advantage in keeping physicians on the defensive.

The beauty of monoliths is that no matter how hard you try there is no way to break in and get what you want.  No matter how many times I call the government bureaucracy in charge of dealing with managed care company complaints, I will get the same predictable runaround.  The first several lengthy calls will result in me talking to people who are not even sure that they should be talking with me.  They will send me to somebody in another building in an obscure department and eventually the calls will stop again.  I have wasted many hours of my life trying to crack into this monolithic state government bureaucracy without success.  I think it also illustrates some additional defining characteristics of monoliths - secrecy, anonymity, and a lack of accountability.  Eventually you end up talking with people so far removed from the problem, it is not clear how you ended up in touch with them in the first place.  Their names and positions are meaningless.  It is clear that they can't help you and if you wanted to complain about them it would not make any difference.  They are so far removed from your original problem it doesn't matter anymore.  You can rage against the monolith as much as you want and it doesn't make any difference.  There may be a conspiracy of monoliths if you are working with an employer who wants you to try to cooperate with them and makes that part of your contract.  Employers like that are often monoliths themselves, with various strategic firewalls around the organization to prevent employees from providing feedback on company policy.  Monoliths often trigger conspiracy theories because they are either intentional or unintentional conspiracies.

That brings me to the interesting phenomenon of monolithic psychiatry.  Assume for a moment that all psychiatrists in the country are in a monolithic structure like the one I described for the state bureaucracy.  It might make sense for someone to rage against the monolith by declaring psychiatry is heavily influenced by the pharmaceutical industry or psychiatry overprescribes medications or psychiatry isn't interested in psychotherapy or whatever anyone wants to apply to the monolith.  Since we are talking about a monolith, whatever applies to one psychiatrist applies to them all which logically makes the criticism one big absurdist editorial.

There are many things wrong with that picture.  Psychiatrists have the most diverse population of any medical specialty and it is the farthest to the left.  More psychiatrists are liberals and psychiatry is the only specialty group that is predominantly composed of Democrats.  The broad range of interests of psychiatrists are evident at any American Psychiatric Association (APA) meeting and various annual subspecialty meetings.  Courses are available on a broad range of medical, neuroscientific, and psychosocial topics.  Psychiatrists work in a number of specialty areas and it is very likely that certain practices are highly specialized and focus only on the diagnosis and treatment of specific conditions.  That is not the structure of a monolith.  The total number of psychiatrists varies on the source.  The American Medical Association (AMA) census in 2010 put the number at 42,885.  The Census put the number at 40,600 in 2009 and of those 26,200 were office based.     According to the Bureau of Labor Statistics there are only about 25,000 psychiatrists who are employees of organizations.  The remainder are in private practice.  The American Psychiatric Association sent me the following data on the membership for the past 15 years. 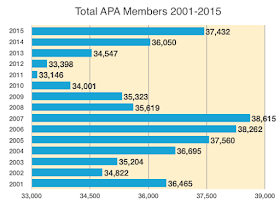 As a measure of monolithic behavior,  in one of the most critical APA election in recent years regarding maintenance of certification (MOC) only 6,943 members voted.  Action requires a vote of at least 40% of the membership.  Interestingly the MOC vote occurred in 2011, the year of the lowest number of members.  The total vote was not close to the 40% number, but it exceeded the vote for the President Elect and Secretary by about 1,300 votes each.  Presidents are typically elected by less than 20% of the members.  These facts illustrate that the majority of psychiatrists in this country at any one time are being directly influenced by employers and in the overwhelming number of cases those employers are managed care organizations whose policies are generally inimical to quality psychiatric care.  It is also apparent from the vote and the election patterns within the APA, that there is not a lot of political activism or interest for that matter.  Hardly the behavior of a monolith.

The real difference with monoliths is the anonymity and secrecy issue.  Every practicing psychiatrist is on record as being responsible to his or her patients.  That responsibility is documented in medical records and pharmacy records.  In any state, any physician can be reported to a medical board for practically any reason.  Psychiatrists are held to the same professional standards as all physicians and that is a high bar, but it illustrates again - no monolith.  I can beat my head against the wall all day trying to get a prescription authorized, but any complaint about me gets immediate attention and immediate scrutiny of my practice by the state medical board that I practice in, my employer, various committees or other state agencies, and in some cases my malpractice insurance carrier.

All of these factors combine to lead to more diverse interests and opinions that in any other field of medicine.  As far as critics of the field, some of the best criticism comes from within psychiatry than from anywhere else.  That does not prevent the various antipsychiatry factions from posting blanket criticisms of "psychiatry" (whatever that might be) and coupling it with any irrational or rhetorical criticism that they might like.  I criticized some of this in the past and avoided most of the expected endless argumentation in response to my replies to these points.  To me the rebuttals are factually no big deal, but critics of the monolith are so certain about themselves that they really don't do well with criticism directed back at them.   I thought I would illustrate my point about monolithic psychiatry with some direct quotes from Robert Whitaker's book Mad in America.  The page numbers are included for reference, but they are all from Chapter 7. 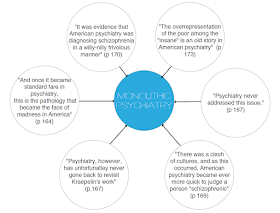 I thought about addressing all of these quotes point by point, but decided that would be the standard type of endless argument that passes for Internet discourse, but is really an exercise in futility. Instead, I will just point out what I mean by the monolith strategy.  In this case the author looks at a combination of quasi-experimentation, historical associations, rhetorical arguments, and actual problems that were researched and changed by psychiatrists themselves to indict monolithic psychiatry.  Monolithic psychiatry is frozen across time.  It can never change and it almost certainly does not self-correct without the valuable input of people who have never been trained as psychiatrists or practiced psychiatry.  There is no reason to expect that any of the worst case scenarios described were rare events or that they are less likely to occur today.   Monoliths don't change.  This is an interesting perspective of course because there is no organization or profession that could withstand this kind of criticism.  It is a unique form of criticism that is only applied to monolithic psychiatry.  It is also interesting because the real monoliths behind the current plight of the mentally ill in this country that I mentioned in the first few paragraphs are completely left out of the picture.

As recorded history would have it, things have changed and they continue to change.  Psychiatrists can treat mental illness successfully across a number of settings and with a number of methods.  It happens on a daily basis and it happens hundreds of thousands of times per day.  It doesn't happen because monolithic psychiatry has a monopoly on the treatment of mental illness or a diagnostic manual.  There are many more primary care physicians and non-psychiatric mental health providers (see supplementary 2).  It happens because the treatment is successful and psychiatrists generally provide patients with the treatment and information that they need.

That is hardly the behavior of a monolith.


Supplementary 1:  The graphic at the top is from Shutterstock.

Supplementary 2:  Psychiatry is dwarfed by the number of other mental health providers including 88,000 Family Practice specialists, 162,400 Internists,  100,000 psychologists and 120,000  Social Workers.  I don't know the number of Psychiatric Nurse Practitioners or Physician Assistants whose primary role is to prescribe psychotropic drugs, but I will happy to add it if somebody has that information.  Although I am sure that some of the physicians in these primary care groups don't prescribe some psychotropics, I am sure that 80% of all psychotropic medications in the US and most western countries are not prescribed by psychiatrists.  So remind me again, what would Big Pharma get out of controlling monolithic psychiatry with pizza, donuts, and KOLs?